Marco Lenis has been a member of the Center for Governmental Studies since 2008. In his consulting role with CGS, Marco created and currently directs the Latino Business Accelerator Program. A passionate advocate for small business development, Marco has advised more than 100 Latino small business owners in Illinois. In 2003, he was named the Minority Small Business Advocate of the Year for both the state of Illinois and the Great Lakes Region by the U.S. Small Business Administration.

Marco was actively engaged in helping to ensure a high level of Latino participation in the 2020 U.S. Census, raising awareness of the importance of the census and breaking down language and cultural barriers for Latino families and individuals and urging them to “hazte contar,” or "make yourself count.” In a similar vein, Marco works with students, families and communities to provide linkages and support for educational attainment, job placement, financial literacy and public health.

Marco is a widely known community leader in northern Illinois, serving on numerous boards of directors, including Swedish American Health System and Foundation, First Northern Credit Union, and the Rockford Area Council and Visitors Bureau Foundation. As president and CEO of La Voz Latina for 24 years, Marco grew a small volunteer-led agency into a thriving community-based organization in the Rockford area. Statewide, Marco is past-chairman of the Hispanic Advisory Council of the Illinois Department of Human Services/Division of Rehabilitation Services, a founding board member of the Illinois Association of Agencies and Community Organizations for Migrant Advocacy (IAACOMA) and a member of the Governor’s Task Force on Racial Profiling.

Marco earned a B.S. in Business Administration from Universidad del Valle in his native Colombia, South America. He has graduate business training in non-profit management from the University of Illinois-Chicago and the University of Wisconsin. Marco is a frequent speaker for local, regional and state meetings and has testified before the Illinois General Assembly on Latino affairs. 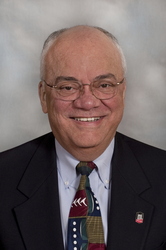